46 - The Language of Secrets; Dianne Dixon 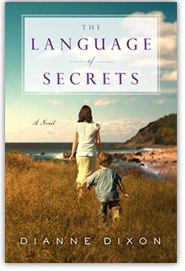 The Language of Secrets; Dianne Dixon
In The Language of Secrets, Justin Fisher has been long estranged from his family. He returns to Southern California with his wife and young son, deciding to reconnect with the family from whom he has been long estranged, but when he arrives he is in for a shock.  He learns that his parents have died, and when he visits the cemetery, he notices on the gravestone, not only the names of his parents, but his name as well.  The dates next to his name indicate he died when he was just four year's old.  Having little memory of his childhood or his parents, slowly details emerge about Justin's painful past.

MY THOUGHTS - I so wanted to love this book. I loved the title, the cover was gorgeous, but in the end I was disappointed.  The story goes back and forth in time, and at times it was difficult to keep track of the many characters and their story lines.  The dialogue seemed strained, and for me, the book was easy to put down, and harder to pick back up.  The novel is one of betrayal, infidelity and long buried secrets. Ultimately, a depressing story, about a troubled man with a painful past whose long repressed memories slowly are revealed.  (Rating 2/5 stars)

Review copy received from Doubleday
Posted by (Diane) Bibliophile By the Sea at 9:18 PM

Email ThisBlogThis!Share to TwitterShare to FacebookShare to Pinterest
Labels: 2010 Challenge Books, Books That I Did not Like, New Authors