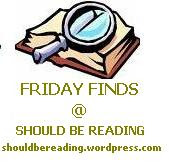 Friday Finds is hosted by Should Be Reading.
Here are a few new finds I discovered this week. Have you read any of these? 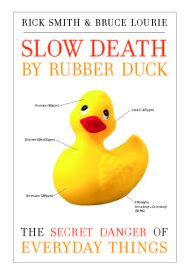 This is one scary book. Using a variety of test methods, the authors determined individual “body burdens,” or the toxic chemical load we carry. The innocuous rubber duck, for example, offers a poison soup of phthalates that “permeate the environment and humans.” From other products and food, we also have a collection of chemicals shorthanded as PFCs, PFOAs, PSOSs, and PCBs. None of them are good, and they are everywhere, thanks to Teflon (which drew the largest administrative penalty against a company ever obtained by the EPA), Stainmaster, nonflammable pajamas, tuna (hello, mercury), and, would you believe, antibacterial products. The legacy of our chemically addicted society is not just all around us but also inside us, and it is killing us, as the Teflon case proved. (Workers in West Virginia believed that “having a high-paying job often meant getting sick,” and many were reluctant to sue and possibly scare DuPont away.) Poised between chirpy green-living manuals and dense academic papers, Smith and Bruce Lourie have crafted a true guide for the thinking consumer. If readers don’t change their ways after reading this one, then they never will. 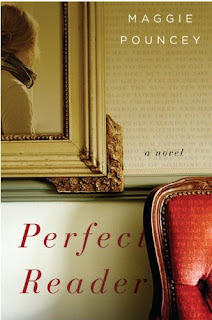 At the news of her father’s death, Flora quits her big-city magazine job and returns to Darwin, the quaint New England town where she grew up, to retreat into the house he has left her, filled as it is with reminders of him. Even weightier is her appointment as her father’s literary executor. It seems he was secretly writing poems at the end of his life—love poems to a girlfriend Flora didn’t know he had. Flora soon discovers that this woman has her own claims on Lewis’s poetry and his memory, and in the righteousness of her loss and bafflement at her father’s secrets—his life so richly separate from her own in ways she never guessed—Flora is highly suspicious of her. Meanwhile, Flora is besieged by well-wishers and literary bloggers alike as she tries to figure out how to navigate it all: the fate of the poems, the girlfriend who wants a place in her life, her memories of her parents’ divorce, and her own uncertain future.

At once comic and profound, Perfect Reader is a heady, uplifting story of loneliness and of the spur to growth that grief can be. Brimming with energy and with the elbow-patchy wisdom of her still-vivid father, Flora’s story will set her free to be the “perfect reader” not just of her father’s life but of her own as well. 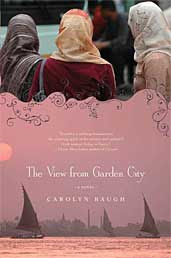 The View From Garden City; Carolyn Baugh
(amazon)
They may watch The Bold and the Beautiful, but for many Islamic families in Cairo, it is not romance but arranged marriage that determines their lives. Told through the intimate stories of six Egyptian women across class, age, and four generations, this stirring first novel is about the power of tradition, including the horror of female circumcision, as the narrator, a graduate student at the American University in Cairo, gets to know mothers and daughters and becomes aware of their surprising strength under oppression. What gives the novel depth is the fact that men are not all demonized: there is the father who refuses to allow his daughter to be circumcised, always anguished that his wife could feel no sexual pleasure. Then there is the husband as lonely in an arranged marriage as his wife. The female characters also move well beyond the usual stereotypes: the mother-in-law is a bully, but her heartbreaking love story is unforgettable. Baugh gets behind the veil by surprising us with her plot, characters, and sense of place.
Posted by (Diane) Bibliophile By the Sea at 5:51 AM