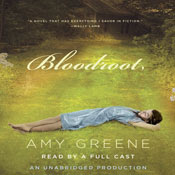 Bloodroot
"Named for a flower whose blood-red sap possesses the power both to heal and poison".
A multi generational debut novel that takes place deep in the Appalachian mountains of Tennessee. The audio version is read by a full cast of readers, whose voices tell a haunting, yet realistic, tale of the Lamb and Odom clan. Their story chronicles the history of these individuals and the life long effects of poverty, alcoholism  and violence.  For generations, magic has played an important role in the real lives of these families, and it was believed that a curse on this family would be lifted when a baby was born with deep blue eyes.

Myra, daughter of Clio,  lives on Bloodroot Mountain with her grandmother, Byrdie who adores her. Byrdie has taken care of her since her mother and father were killed in a train wreck. Myra grows up to be a beauty, with deep blue eyes and black hair, but she is a wild spirit. There is also Doug Cotter, a shy boy who is attracted to Myra. However, it is an attractive man named John Odom who wins her heart, and her life is forever changed. Later there are Myra’s twins, Johnny and Laura, whose lives suffer are affected by the acts of others.

MY THOUGHTS - Without giving away anything significant, I'll just add that Bloodroot is a rich character study steeped in suspense -- almost like a Southern Gothic tale.  It is a story which demonstrates just how closely our lives are entwined and how the choices and actions of one generation carry over to the next generation as well.  The writing is vivid, the story memorable and the author is one who I hope see more from in the future.