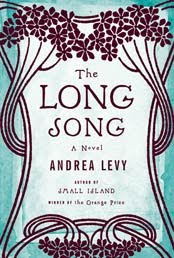 THE LONG SONG,  by Andrea Levy is a touching story set in 19th century Jamaica. The novel is written in memoir form, and the story is narrated by July. July is now an elderly woman who lives with her well educated son and his family. Though her she tells the story of her birth, her childhood, into old age. She was conceived when her mother Kitty, a slave, was raped. Her father Tam was a white overseer of the sugar plantation.

When July was very young she is taken from her mother. The sister of the owner of Amity plantation, Carol Mortimer, demands that little July, come to live with her in the great house. Miss July, as she is sometimes referred to, is spared the most horrible of conditions endured by other plantation slaves. The novel also addresses the 1830's, and the Baptist Wars and rebellion as slavery comes to an end, and (without spoilers), the reader learns what happens as a result.

The LONG SONG  is ultimately a bittersweet novel, with characters I eventually came to care about. The prose is somewhat lyrical, and I enjoyed the occasional humor interjected, especially when the slaves pulled some comical stunts to get back at their masters. Despite the humor, lightly pepper within this novel, the reader does not easily forget, the abuse, injustice and other horror stories experienced by plantation slaves.

I was not sure what to expect when I began this novel as I had never read anything by this author. The LONG SONG is both well written and memorable. I hope to read the author's earlier book SMALL ISLAND as well in the near future. This book is recommended. (4/5 stars)

(Review copy received through Amazon Vine)
Posted by (Diane) Bibliophile By the Sea at 7:10 PM