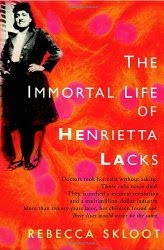 The Immortal Life of Henrietta Lacks
(Have you read this amazing book?)
For those of you who have not heard the story of Henrietta Lacks, Henrietta was a poor young black woman who descended from slaves. She grew up in Virginia and later moved to Maryland. She was a wife and the mother of five small children, and sadly she died of cervical cancer in 1951.


Prior to her death when she was undergoing treatment at John Hopkins, doctors removed cells from her cervix, but not for biopsy. The doctors already knew that her cancer was malignant.  Her cells were removed without her knowledge for research purposes. The cells were named HeLa cells (using the first two letters of her first and last names). This book is about Henrietta, her family, and especially her daughter Deborah, who never really got to know her mother who died prematurely at the age of 31.


A research scientist named George Gey was working with other scientists on cell reproduction, when he came across Henrietta's cells which he quickly witnessed growing and growing at an amazing rate. The cells were reproduced over and over in a controlled laboratory environment. Over the years the famous HeLa cells have resulted in scientific advancements in certain types of cancers, polio, Parkinson's diseases, genetic cloning and other medical advances.  Over the years scientists have grown over 50 million metric tons of HeLa cells which have been used all over the world by scientists.
The author, Rebecca Skloot learned about Henrietta's cells in a Biology class, and became obsessed with learning more.   After much resistance on the part of the family to cooperate, the author eventually gains Deborah's trust, and together the two interviewed friends, relatives, visited family homesteads and burial grounds to learn more about Henrietta's life. They even visit Johns Hopkins to see the "amazing" cells, and investigate the early death of Henrietta's daughter Elsie, who was sent to a mental hospital after her mother's death.


Henrietta's story is truly amazing, but it also brings up all sorts of legal and medical ethics issues for debate.  The author does a wonderful job leaving the reader with a deeper understanding of the issues on both sides of the fence. The book was near perfect, and it is certainly an informative and worthwhile read.