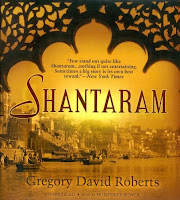 , is at least in part an autobiographical novel, the first for Gregory David Roberts, an Australian prison escapee, and at one time Australia's most wanted man. He was an armed robber and a heroin addict, when he escaped from prison in the early 80's, with his fake passport in hand. Shantaram, is the Hindu name given to the narrator; it means "Man of God's peace".  Throughout the novel, the narrator is also called Lin or Linbaba, a name given to him by a street guide who took a liking to him. Traveling through New Zealand, the narrator ends up in Bombay, and this novel incorporates the story of his life, and the ten years he spent in hiding in India. In Bombay he lives in a slum, founded a medical clinic to treat the poor for free, he joined the local mafia headed by Abdel Khader Khan, who helps this man on the run. Although most of his time is spent in India, his time on the lam had him fighting with the Mujahadeen in Afghanistan, and he also found time to fall in love.

The book is full of colorful characters: Prabaker, the Indian street guide who takes a liking to Lin.  Karla Saarenen, a Swiss-American woman who is running from a troubled past.  Other characters include Quasim Ali, head of the slum, and let me not forget, Johnny Cigar.  There was so much to love about this 933 page book (I also had the unabridged audio which was fantastic). This story has it all --intrigue, corruption, misery, humor, joy, pain and love. The writing is outstanding. As the narrator tells his story, he does so in such a way that  you find yourself stopping to think and reflect about the way he has expressed complex emotional issues. Some of  the scenes that took place in prison made me cringe, and yet they seem very realistic.  In the end I felt like I had a much better understanding of the complexities of society in India in the 1980's.  The ending was perfect, in my opinion. I could envision a sequel or a movie in the horizon.

In real life, the author was recaptured and ordered to serve out the remainder of his nineteen year prison term. It was in prison that he wrote this novel. It took him thirteen years to write this as his first two drafts had been destroyed while he was serving his sentence.

I selected a few favorite passages that really made an impact on me......


"Fate gives all of us three teachers, three friends, three enemies and three great loves in our lives. But these twelve are always disguised, and we can never know which one is which until we've loved them, left them, or fought them."


"I clench my teeth against the stars. I closed my eyes. I surrendered to sleep. One of the reasons why we crave love, and seek it so desperately, is that love is the only cure for loneliness, and shame, and sorrow. But some feelings sink so deep into the heart that only loneliness can help you find them again. Some of the truths about yourself are so painful that only shame can help you live with them. And some things are just so sad that only your soul can do the crying for you."


"I'd always thought that fate was something unchangeable:  fixed for every one of us at birth, and as constant as  the circuit of the stars. But I  suddenly realised that life is stranger and more beautiful than that. The truth is that, no matter what kind of game you find yourself in, no matter how good, or bad the luck, you can change your life completely with a single thought or a single act of love."

is a must read for so many reasons -- do not let the size of the book discourage you. This is sure to make my top 10 list for 2010.


RATING - 5/5
Personal Copy and Library audio book
Posted by (Diane) Bibliophile By the Sea at 9:11 PM