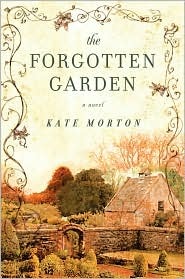 Having read The House at Riverton

, Kate Morton's debut novel, a few months back and enjoyed it, I was anxious to read her second novel The Forgotten Garden

weaves together the story of three women: Cassandra, an Australian woman, her grandmother Nell, and Eliza, a writer of fairy tales.  The novel opens in 1913 England where a little girl has been left on the deck of a ship and told not to tell anyone her name.  The woman who left her, she knows only as the "authoress", has instructed her to hide and wait. When she is discovered on the deck of Maryborough Australia wharf, the couple who find her have little to go on except for a book of fairy tales that she carried in her small suitcase.

In 2005 Cassandra's grandmother, Nell dies and leaves her a Cornish cottage. Cassandra is also given a small suitcase containing fairy tales by Eliza Makepeace. In addition, she learns that her grandmother never knew who her real parents were. Cassandra, devastated by the earlier deaths on her husband and sons and now her grandmother, travels from Australia to the remote estate she inherited in Cornwall England to try and solve the mystery surrounding her grandmother, Nell's past. As Cassandra unearths the secrets of her grandmother's past, she in turn is able to make peace and move on with her own life.

MY THOUGHTS: The story jumps around quite a bit in both place and time, and for some this may be confusing and off-putting.  The clues revealed throughout the book make it relatively easy to figure out the mystery.  I found the detailed maps on the inside covers of the hardcover edition an added bonus that was great to refer back to. I liked this story, but did not love it.  I think it is one of those books that you need to experience for yourself and decide.