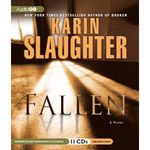 Fallen, is an action packed thriller featuring Special Agent, Faith Mitchell of the Georgia Bureau of Investigations. The audio book, read by Shannon Cochran, opens with a frightening scene that pulled me in early on, and lovers of crime thrillers will most likely be pleased.

Faith's newborn daughter Emma is being cared for by Faith's mother, Evelyn, a former Atlanta police chief. Evelyn was forced into early retirement after corruption in her narcotics unit was discovered.  When Faith finds herself running late to pick up the baby, she tries calling her mother, but there is no answer after several attempts to make contact.  Faith's mind starts to wander first, being logical about when her mother and the baby might be, but then she starts to panic.

When she arrives at her mother's house, there is blood at the door steps, her baby is inside of the shed (but unharmed), she calls for backup.  Upon entering the house one man is dead, a confrontation with two others ensues, the house has been ransacked and her mother is nowhere in sight.  What happens next will prove to be Faith's worst nightmare.  Not only is her mother missing, but Faith's actions are questioned as a result of what occurred at her mother's home.

Will Trent, Faith's partner, is determined to help her find her mother, and to get to the bottom of why her mother was targeted.  Was it something related to what happened while she was police chief, or was something else going on?

Karin Slaughter does a great job with character development. Her characters are fully explored, and readers of her two earlier novels in this series: Undone and Broken, will see that secrets about the key characters pasts are fully explored. The details are revealed in such a way that I found even the most flawed characters seemed all the more sympathetic, with the exception of Will's wife, who was so unlikeable, that I wished her out of the story permanently.  In the end, it seemed pretty likely that another book in this series might follow.  Could you read this book without reading the other two? Yes, but in my opinion you will get a better feel for the characters if you were introduced to them beginning with Undone, and get to see how each character has evolved.  I thought this novel made for a very good listening experience.
Posted by (Diane) Bibliophile By the Sea at 9:01 PM