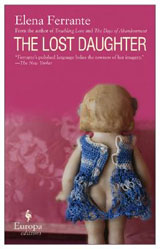 "I had been driving for less than an hour when I began to feel ill.  The burning in my side came back, but at first I decided not to give it any importance.  I became worried only when I realized that I no longer had the strength to hold onto the steering wheel.  In the space of a few minutes my head became heavy, the headlights grew dimmer;  soon I even forgot that I was driving.  I had the impression, rather, of being at the sea, in the middle of the day.  The beach was empty, the water calm, but on a pole a few meters from the shore a red flag was waving.  When I was a child, my mother had frightened me, saying, Leda, you must never go swimming if you see a red flag: it means the sea is rough and you might drown. That fear had endured through the years, and even now, although the water was a sheet of translucent paper stretching to the horizon, I did not dare go in: I was anxious, I said to myself, go on, swim: they must have forgotten the flag, and meanwhile I stayed on the shore, cautiously testing the water with the tip of my toe.  Only at intervals my mother appeared at the top of the dunes and shouted to me as if I were still a child: Leda, what are you doing, don't you see the red flag?"


What are your thoughts about this opening paragraph?
Posted by (Diane) Bibliophile By the Sea at 6:34 AM