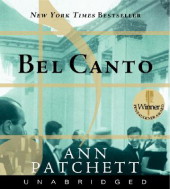 Ann Patchett is a favorite author, yet for some reason, it took me (10) years to read listen to this book.  I actually finished it about a month ago, made some notes, and finally had a chance to put together a short review.  I liked it, but didn't love it.  If there are others who haven't read this book yet, here is a little review.

Bel Canto (beautiful song) is somewhat of a political thriller, but one with emotion and compassion to some degree. The story is about a hostage situation which takes place in some unspecified South American country, when the Vice President of that country is hosting a birthday party at his mansion where some powerful people are in attendance.  The guest of honor is Katsumi Hosokawa, a powerful Japanese business man.

During the part a militant group storms the party. Their target is the country's President, but fortunately for him, he is not in attendance.  When the militants realize this, they take all the guests as hostages.  The hostage situation extends for months and some unexpected things begin to happen between the guests and the militants.  The key characters, Hosokawa, for example, is transformed by what has been happening and that transformation is a positive thing. Previously a man who busied himself in work, but found little passion in life, except from art, finds himself feeling like a new man through Opera music.  In the process, he becomes captivated by another party attendee, Roxanne Coss, an opera singer.

Roxanne knows she is seen as very desirable among men because of her notoriety as a woman with a beautiful voice, but when it comes to relationships with men, she's a taker not a giver.  Another central character is Gen Watanabe, Mr. Hosokawa's assistant.  He plays a key role during this crisis serving as translator between the guests and militants.  In the process, he finds himself falling for Carmen, one of the terrorists.

The story was told from the third person POV which worked fine for this story. It was ironic, that for the key characters, it was only in the face of possible death, that passion stirred inside of them for the first time in their lives. Although some of the hostages are released, the key characters are in until the bitter end.  I found the ending to be somewhat of a shock, and although I wasn't thrilled with how the story played out, it did not spoil the listening experience for me. The reader was very good, and the story held my interest.

Have you read this one? What were your thoughts?

I can finally say that now I have read ALL of Patchett's books.
Posted by (Diane) Bibliophile By the Sea at 7:41 PM