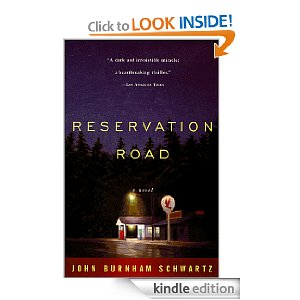 Reservation Road is a tragic novel about the death of a ten-year old child.  As the story begins The Learner family is returning home from a concert, driving along a darkened road, Reservation Road, in North Canaan, Connecticut when the youngest child, Emma needs announces her need to use a restroom.  The father finds a dimly lit gas station/auto body shop along the road and pulls into the parking lot. While the mother Grace, and daughter head for the restroom, the father, Ethan, runs inside to make a purchase, while son Josh waits outside.  Josh wanders too close to the side of the curving road, it's dark outside and he is wearing dark clothing.  Along comes a vehicle driven by another father, a single dad, Dwight Arno, with his young son Sam asleep in the car.  After the Boston Red Sox game they attended went into overtime, he is late bringing his son home, and knows his ex is going to be furious. Driving too fast along the winding Reservation Road, with a headlight out, he sees something dark at the edge of the road,  swerves his car, but hits Josh in the process.  The impact wakes his son Sam who was asleep in the car, and the boy bangs his face on the window, giving him a black eye in the process. When Sam asks what happened, Dwight tells him that they hit a "black dog", but that he was sure the dog was had died, so he continues to speed, to return Sam home to his ex-wife in the hopes he has not jeopardized his visitation rights.

What follows is a compelling story of two fathers, and a family forever changed by the death of a child.  The story is told from the alternating points of view of the two fathers. As the reader, I couldn't help but feel badly for both men. Ethan, who lost his son and Dwight, the hit and run driver who struggled to build a relationship with his own son who was about the same age as Josh. Dwight had limited visitation with his son because his former wife lied to the courts about him being abusive, having a reputation as a hot-head.  Although Grace, grieves for her lost son as well, she does so at the expense of little Emma, and because of that, she was my least favorite character.

As Ethan and Dwight tell their stories, revealing significant events about their marriages and fatherhood, it soon becomes clear to the reader that their lives will intersect before the story ends.  What follows is a compelling, page turner written in a way that will make you think about how your life can change in a split second. It's about tragedy, guilt -- for what was done and what could have been done. The story was packed with emotion and one book that will be hard to forget.

John Burnham Schwartz  just had a sequel to this novel released.  His new novel, Northwest Corner, is one book that I am anxious to read.
Posted by (Diane) Bibliophile By the Sea at 7:45 PM