This week's selection is to be released in October (Crown) and is by one of my favorite authors. (I've read all of his books). I am 1/3 of the way into this one and it has held my interest. 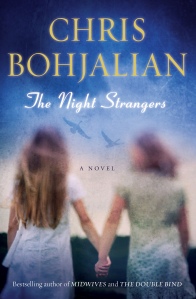 
" You see the long, wide, perfectly straight strip of asphalt before you, the hanger to your right with the words GREEN MOUNTAIN BOYS painted in billboard-size letters along the side.  You recognize it as Burlington's runway 33, facing to  the northwest.  When your first officer lifts your plane off the ground, you know there will be a slight bump in about eight or nine seconds as you rise up and cross over the ravine churned out by the Winooski River.  There is always a slight updraft there, even on a muggy afternoon such as today's.  The sun has begun its descent in the west but is still high above the Adirondacks."

Does this opening paragraph draw you in? Not for me, but I kept reading and am now hooked.
Here's the Book's Overview -
In a dusty corner of a basement in a rambling Victorian house in northern New Hampshire, a door has long been sealed shut with 39 six-inch-long carriage bolts.

The home's new owners are Chip and Emily Linton and their twin ten-year-old daughters. Together they hope to rebuild their lives there after Chip, an airline pilot, has to ditch his 70-seat regional jet in Lake Champlain due to double engine failure. The body count? Thirty-nine.

What follow is a riveting ghost story with all the hallmarks readers have come to expect from bestselling, award-winning novelist Chris Bohjalian: a palpable sense of place, meticulous research, an unerring sense of the demons that drive us, and characters we care about deeply. The difference this time? Some of those characters are dead.
Posted by (Diane) Bibliophile By the Sea at 6:20 AM