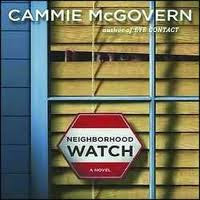 Have you ever read a book and not realized you had read it previously until you were almost done with it?  That's what happened to me with this book.  Not until the end did it start to sound very familiar, but I merrily listened along and then checked to see whether I read it -- yup (hardcover 2010) when the book was first released.   Oh well, although my rating is still the same, I think I even enjoyed this audio version even a bit more (2) years later.  Here's my take....

Hey, who among us book lovers would not be drawn to a story about a somewhat sad-sack, former  librarian who spent (12) years in prison for a murder she didn't really commit?  This is what happened to Betsy Treading in Neighborhood Watch.  Betsy was accused and confessed to the murder of her neighbor, Linda Sue.  She confessed, not because she did, but because she couldn't remember, and a bloody nightgown was found in her house.

When Betsy is released from a Connecticut prison, her lawyer suggests she snoop around her old neighborhood a bit, to see if she can come up with anything that may lead to finding Linda Sue's killer.

The story is narrated by Betsy and the story quickly engages the listener.  Betsy doesn't remember much about that night, and she did have a history of sleepwalking, a history of childhood trauma which has caused her to block out painful memories, and she did dislike Linda Sue.

Although most of the old neighbors have moved, Betsy slowly begins to piece together what likely occurred the night Linda Sue was killed.  This audio book was read by Coleen Marlo who did a great job.  You'll be guessing along the way who was involved in the murder. A fun audio book.
Posted by (Diane) Bibliophile By the Sea at 9:17 PM