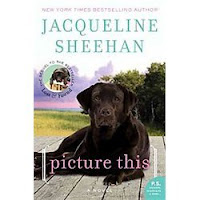 Picture This, a sequel to Jacqueline Sheehan's novel, Lost in Found, picks up where the other story left off, when Rocky Pelligrino's husband Bob, died a sudden death at the young age of forty-three.  Rocky, still grief stricken,  has rented a summer house on a tiny island (Peaks Island) in the middle of Maine. While she is trying to decide about returning to her counseling job at the University, she has taken on a job as game warden on the island. She and her large black Labrador, Cooper have begun to ease into a somewhat more normal kind of life.

On the island, Rocky has made a few friends who have had mutual healing powers for the other party.  Melissa is a teenage girl struggling with an eating disorder, who has found comfort being around Rocky and Cooper, and is coping with her battle with anorexia. Cooper, the Lab is a character in himself as he gives his perspective on what his "humans" mean to him, and how he sees his role around them.  Rocky has even taken a few steps toward a new relationship with her archery instructor as well. He's patient, hard-working, and an all-around nice guy, but Rocky isn't sure she's ready for a serious commitment.

One day Rocky gets a phone call from a young woman named Natalie, who is looking for her father. The girl, now eighteen,  has spent her life thus far in too many different foster homes. Natalie believes Rocky's late husband Bob, is her biological father. How could this be? Is Natalie mistaken?  Rocky's counseling background and warm nature, immediately wants to help and nurture this poor girl. She allows Natalie to spend some time with her and Cooper while she looks for a job.  This decision causes turmoil in Rocky's life making her feel unsettled once again, yet determined to find out the truth about Natalie's birth father.


My Thoughts - I'd first recommend that readers interested in this one should first consider reading Lost and Found  to get a better feel for where Rocky has been and what she is all about. I actually liked that book as well as another book of hers called, Now and Then better.  Although it would be hard for me to imagine what Rocky has been through, I just found her incredibly annoying at times.  I also thought there were too many other characters issues being discussed.  I would have preferred more of a focus on Natalie's time in foster care and Rocky's story instead.  It is one of those stories that will appeal to some readers more than others, and some may find the reading sad as well.  Although this book wasn't perfect for me, I would still definitely read more books by this author; the cover art is always terrific for her novels as well.
Posted by (Diane) Bibliophile By the Sea at 8:01 PM