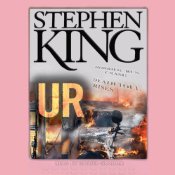 
I've been on a Stephen King kick in this past year, ever since I feel in love with 11/22/63 at the end of 2011. I then listened to The Gingerbread Girl on audio (a short novella, and next up was an audio book (another novella) called UR.  The story is about an English teacher in his 30's, named Wesley Smith. He and his girlfriend Ellen have just broken up. She couldn't understand his obsession with books and why he had so many in his house.  He decides to purchase an eReader (yes a Kindle) to spite her.

When Wesley's Kindle arrives, "it's pink", and he is puzzled. He clearly must have received some other person's purchase. From the minute he first powers on the device, he is amazed at all the books he now has access to at his fingertips, but before long it's pretty clear that this is no ordinary eReader. There's a function on this pink Kindle marked UR and when used the UR takes Wesley to parallel universes, where never heard of before literary titles by folks like Hemingway are available for this Kindle.

While the entire audio book is only (2) cds, the later portion of the story got a little weird I thought. I still enjoyed it, and while this book definite works as a promotion for the Amazon Kindle, it was still  a fun audio book. I think most book lovers feel this way as well.  The reader Holter Graham did a great job.
Posted by (Diane) Bibliophile By the Sea at 7:38 PM