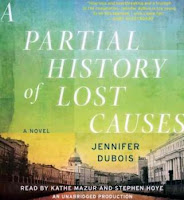 
All of us are doomed, but some are more doomed than others.
Vladimir Nabokov

A Partial History of Lost Causes is a story about two very different individuals whose lives are about to intersect. Aleksandr Bezetov, is a former chess prodigy who decides to challenge Vladimir Putin for President of Russia. The other individual is a 30 year old college lecturer from Cambridge, MA named Irina Ellison.

After Irina’s father dies from Huntington’s disease, she finds a letter that he had written some twenty years earlier to the Russian chess champion, Bezetov asking him, “what is the proper way to proceed when you are dealing with a lost cause.” Her father died without ever receiving a reply. Seeking an answer to the question while suspecting that her life will also be cut short because of a genetic link to Huntington's Disease, she decides to leave her American life behind, and go to Russia to track down Aleksandr Bezetov. Not only does she hope to get an answer to her father's question, but also she hopes to add adventure and meaning to what time she has left in life.

This debut novel held my interest, and the audio book readers were very good as well. I liked the way it is narrated by the two main protagonists, in alternate chapters.  It was interesting to read about descriptions of life from the Cold War to the present. I also enjoyed the way the story rolled out contrasting Irina's personal struggles, which she had no control over, with the self inflicted struggles of Aleksandr --the two, an unlikely pair of lost causes. Without giving away significant spoilers about how this story turns out, I'll just say I was pleased  to see that Irina does find the answer to the question that she and her father wanted to know.


A Partial History of Lost Causes is the type of story that makes you remember to appreciate what you have, and to make the most of your life even if the odds are against you.
Posted by (Diane) Bibliophile By the Sea at 8:55 PM