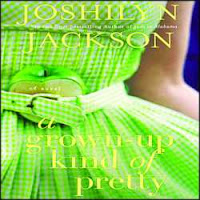 By looking at the cover of this novel and the title for that matter, a reader not familiar with Joshilyn Jackson's previous novels might imagine that this book is a light, fluff-filled southern tale --- but that reader would be wrong.

A Grown-Up Kind of Pretty, is a story about three generations of southern women, but there is a mystery element that is introduced early on --- a box containing tiny bones and a small dress is unearthed by a contractor hired to remove an old willow tree.  Immediately, I was drawn in and was listening almost non-stop; it's that addictive.

The women in this novel are 45 year-old Ginny (aka...Big) Slocumb, her 30 year-old daughter Liza and 15-year old Mosey, daughter of Liza.  The women believe they have been cursed because ever 15 years, something seems to happen to one of them, and now Mosey is 15.

When Big was 15, she was raped by her date, impregnated and later gave birth to Liza who she raised on her own.  Daughter Liza was a wild-child --her interests were men and drugs.  She too, became pregnant at age 15.  Now Mosey, 15 (that unlucky number again), so Big makes sure she is sent to private school, hoping to avoid having something similar happen to her.

Not wanting to spoil the story for any potential readers, I'll just say read this one, I doubt you will be disappointed.  The writing is terrific, the characters are ones you will care about, and if your are like me, you'll appreciate the humor infused at times as well.  The family dynamics and mystery element added to whole audio book experience.  Normally, I tend to avoid audio books read by the author, but Ms. Jackson is the exception -- she is fabulous -- pitch perfect.

Read this One!
Posted by (Diane) Bibliophile By the Sea at 12:30 AM