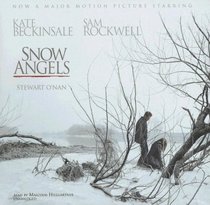 
Snow Angels, was a very dark novel of small town life in Pennsylvania in the mid-1970s.  It's a tragic story that involves two families, and as the tragedy is introduced early on the story then flashes back so that the reader gets the full picture of events leading up to the tragedy.

In the story, Arthur Parkinson, now a grown man returns to his childhood community in PA, where he reflects on the events which attributed to his unhappy childhood.  His parents were not nurturing parents, rather selfish and self-centered.  After some irresponsible acts, their marriage dissolves, and 15 year-old Arthur now moves with his mother to a rundown apartment. He becomes aloof, and he copes by smoking pot, listening to loud music and pretending not to care, about his new situation or the lives his parents are now leading.

The other story involves Arthur's former babysitter, Annie Marchand, another selfish, self-centered woman, who puts her own desires ahead of her daughter Tara. She leaves her husband, a man who soon begins to lose his grip and spirals out of control.

Without giving away too much of this short novel, I must say that I found all of the characters, with the exception of Arthur, to be their own worst enemies. I felt for Arthur, as his life growing up was what it was because of the irresponsible acts of those who were responsible for him.  Although this was not a favorite O'Nan book of mine, it's probably the most depressing of any that I've read or listened to, it was still a good story.  This is one book that I DO NOT recommend listening to the audio. Although the reader was good, the tone made the story seem all the more bleak.
Posted by (Diane) Bibliophile By the Sea at 10:02 PM