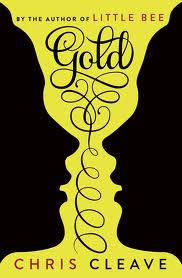 Gold, was released this month and given it's subject matter, it is a timely novel as the world prepares for the 2012 summer Olympics in London.  The story takes place in Manchester, England  where long time friends and rivals Zoe and Kate, are competitive cyclists, along with Kate's husband Jack.  Kate and Jack have an eight year-old daughter named Sophie who is obsessed with Star Wars and is also battling Leukemia and undergoing treatments.

Zoe and Kate are very different. Zoe's had a troubled childhood, suffering the loss of her younger brother at an early age. She has a tough shell and anger issues; her whole identity and only goal in life is to be a winner.  She's won gold medals in the past, as had Jack, but Kate has not.  Baby Sophie arrived when the (3) were preparing for the Athens Olympics. All (3) are now at an age where this will most likely be their last chance of competing and of walking away with the Gold.

Gold, is a page-turning read with surprised in store for the reader.  It's also an emotionally charged read and although the ending seemed a bit contrived, the story moved me and it's definitely a book I'll be recommending.  Zoe was a character that I disliked early on, but once I got to learn her story, at least I was able to understand why she acted the way she did.  Kate, on the other hand, was a character I liked a lot, she was a young woman who put the needs of others before herself.  She's reserved and less confident that Zoe as well, but a very sympathetic character.  Zoe, was a loveable little girl. She always tried to hide the side effects of her treatments from her parents so they would not worry about her. For a young girl, she carried the weight of the world inside of her and acted much older than she was.  Her constant obsession and references to Star Wars did get tiring at times for me.  Tom, was the coach of both girls and another character I liked. He met the girls in 1999 when he was working for the Elite Prospects Program, and his caring and introspective nature won me over early on.  Jack, was Jack and some of his actions bothered me at times.

Chris Cleave fans who enjoyed Little Bee (the Other Hand in the UK) should enjoy his latest novel.  I hope you are as impressed as I was.
Posted by (Diane) Bibliophile By the Sea at 9:24 PM