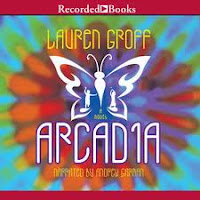 In a nutshell, Arcadia is a story about commune life in upstate new York in the early 70's, and most baby boomers like me know that kind of life rarely goes well long term.  The "Free People" of Arcadia, to insure success of their community believe in: "Equality, Love, Work, and Openness to the needs of Everyone."  The commune is built on a rundown farm and mansion which was acquired by one of the commune's members and later sold to Handy, the commune's cult-like leader and his wife Astra for $1.00. The name found above the door, Arcadia lived on.

The story itself has several parts to it, and begins when "Bit", AKA Ridley Stone was about five years old. Bit was the first child living at the commune was born to Hannah and Abe.  In the final part of the novel we see Bit some 50 years later. Along the way the reader gets a glimpse of commune living as seen through a young child who witnesses much more than any child of that age should have witness, much of which he doesn't understand because of his age.  He loves and cares about his huge extended family.

When the great big family grows too too large, a lack of housing, poor sanitary conditions, lack of food, drugs and laziness on the part of some members become real issues. Eventually members leave the commune life and suddenly children who never experienced life outside of this commune are experiencing something foreign.

What may sound to some as a relatively simplistic story is really not all that simple.  The fact that it covers a period of 50 years of Bit's life from commune child, to adolescence, marriage, fatherhood and life as a university instructor and even caregiver to a sick parent kept the story moving.  Other commune dweller's lives are followed as well, but not to the same extent.

Did I like the book? It was an okay read/listen for me, because I was curious what later life would be like for the characters, especially Bit.

This book took me forever to review, having completed it in mid-June.  Why? It was hard to get my thoughts sorted out, because the writing is good and the audio book was well done, but something didn't work well for me, and I'm still not totally sure what it was --perhaps the ending.

I'm curious to hear what other readers thought of this book.