For today's First Chapter First Paragraph Tuesday Intro, I'm featuring a book I began yesterday. I haven't seen this one blogged about, but I want to say that I am enjoying it so far. 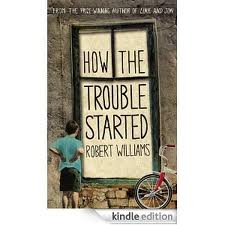 How the Trouble Started; Robert Williams
Faber and Faber - July 2012

"The police were involved over the trouble.  They had to be.  But I didn't think of them as the police at first.  As an eight-year-old boy I expected uniforms, flashing lights and handcuffs.  Speeding cars and the glimpse of a gun.  Instead there was this woman in a business suit who drove a grey car slowly and always smelt of coffee.  She told me to call her Tracy, but I never called a grown-up by their first name before and couldn't bring myself to do it.  I tried, but it felt as impossible as saying 'fuck' in front of my mum, or jumping off a wall that was too high.  I teetered on the edge a few times but my brain wouldn't make my mouth form the correct shape and I ended up calling her 'Miss' instead.  'Tracy', she said, the first few times, but after a while she shook her head and gave up."

Would you keep reading?
Posted by (Diane) Bibliophile By the Sea at 12:30 AM