Power Foods for the Brain: An Effective 3-Step Plan to Protect Your Mind and Strengthen Your Memory; Neal Barnard, M.D. 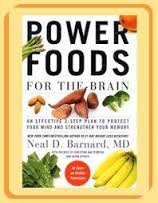 Having begun 2013 with a goal of eating healthier, Power Foods for the Brain, by Neal Barnard, M.D., seemed like a book worth taking a look at.   Dr. Barnard suggests that eating a plant-based diet, increasing time spent exercising and getting more sleep might protect you from developing memory problems later in life. The book focuses on 4 food groups we should eat more of: fruits, vegetables, grains, legumes, and he also recommends that you keep oil intake low.  He believes it is these food groups that contain large amounts of nutrients and antioxidants that may actually help reduce brain shrinkage by eliminating free radicals from our system, which destroys brain cells.
Dr Barnard does remind us that there are some genetic factors that play into an individuals likelihood for developing dementia and/or Alzheimer's disease, and mentions the fact that a rare gene has been linked to early-onset Alzheimer's as well. He even uses observations of his own family members who were raised on a cattle farm and ate a regular diet of meat, potatoes and corn. He reports that old age and dementia went pretty much hand and hand for his relatives. He does acknowledge the fact that even vegans can develop Alzheimer's, but based on numerous studies of looking at what people ate and what other healthy changes they made over the years, he concludes that improved brain functioning can result and  that it is even possible to promote the growth of new neurons.
I felt there is something for most everyone to be gained by reading this book.  I especially liked that there were some 75 power-food recipes developed by (2) chefs  - Christine Waltermyer and Jason Wyrick. The recipes actually look quite good. There are also mental stimulation exercises and physical exercise suggestions, as well as, tips on choosing aluminum-free foods and medicines.
Recommended
Posted by (Diane) Bibliophile By the Sea at 7:58 PM