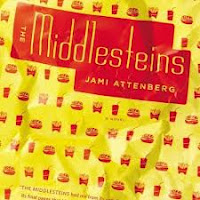 The Middlesteins is a story about dysfunctional families. The story begins by describing "Little Edie", a pampered little Jewish girl who weighted 62 lbs by the time is was 5 years-old.  Spoiled by both parents, and constantly given food for comfort from an early age.

Flash forward 50 years and Edie, the novel's central character, is now  "huge Edie", topping the scale at 300 lbs. Edie is literally killing herself with food.  She is a retired lawyer, married to Richard who had once run a chain of successful pharmacies, which are now losing money.  The couple lives in a middle class suburb of Chicago and they have two grown children, Benny and Robin, as well as grandchildren.

Now at 300 lbs, Edie is facing her second surgery for diabetes complications yet she can't seem to help herself to lose weight and stop eating the foods that are poisoning her.  Her husband Richard leaves her, her daughter-in-law steps in to try and rescue her. She spies on her to see where she is stopping for food and monitoring what she buys for quick food fixes.

The descriptions of the food she consumes along with the rationale for eating, were often humorous, but also they showed just how out of control Edie was.  Edie was a character I felt for even though she seemed unable or unwilling to help herself.  All of the characters in this novel had communication issues, as well as anger or previously unresolved  issues which made them flawed in their own way. I didn't care for Edie's husband Richard, and understand why others felt the way they did when he left his wife when she was at her worst.  I don't condone what he did, yet I understand why he did it.

Stereotypical overbearing Jewish parents seemed to contribute the individuals problems in later life..  The novel also made you think about what an adult child's duty is to their parents. I actually enjoyed this book more than I expected to. It held my interest and was infused with appropriate humor. This is a story that stuck with me. Readers who like reading about families in crisis should enjoy this novel.

The audio version is read by Molly Ringwald, who did a great job.
Posted by (Diane) Bibliophile By the Sea at 7:04 AM