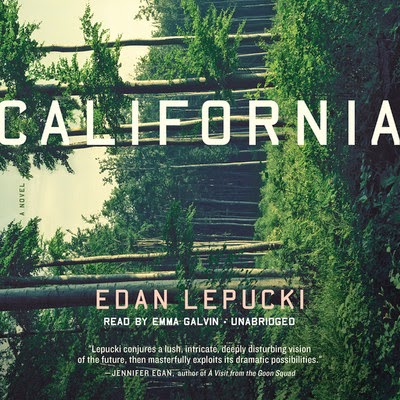 In California, by Edan Lepucki, civilization as we have known it is gone after what we can only assume was some sort of apocalypse. Frida and Cal are a young married couple fleeing Los Angeles to live off the the land in a lush forest to the north of LA. With the shelter of a shack nearby, foraging for food, the couple seems happy, perhaps too happy, given the circumstances. To add to the unsettling situation, Frida suspects that she is pregnant.

Given the situation the two search for a more communal lifestyle, but they have no idea what they are in for.  They find a strange town,  surrounded by “spikes” meant to keep the undesirables away. The group with its self-appointed leader promises protection, but at what cost?  Many of the things that the couple has long taken for granted are forbidden here, in what they initially thought might be a safe haven for them.

I must admit this was a trying book for me. First dystopian novels are not a favorite for me in general, but because there was so much hype about this book, I was anxious to try it.  I liked the beginning very much and I thought that the set up felt very atmospheric. However, once the couple joins up with the questionable group and becomes at odds with one another, I found I had a hard time caring about the couple.  The story is told in alternating POVs with lots of flashbacks along the way. The writing is good and the author shows promise, but the story itself just was not a good fit for me. I encourage other readers, especially lovers of dystopian fiction to give this California a try.

The audio book was read by Emma Galvan who did a decent job portraying the bleakness of the situation and showing just how naive this young couple was.