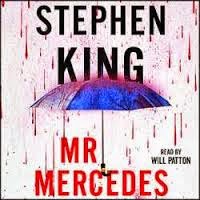 In Mr. Mercedes, Stephen King hooks his readers early on.  Picture the scene - hoards of people in line, waiting for the doors to open for a job fair in an economically depressed mid-west town -- I'm picturing somewhere in Ohio. People are making small talk to pass the time when a crazed psycho sees a chance to get his kicks.  The nutcase behind the wheel of a stolen "Mercedes" plows the vehicle into the crowd. Several dead, many injured, some maimed. The driver disappears, but he's not going away that easily.

The "Mercedes" driver is 30-something, Barry Hartsfield, a computer savvy loser who works fixing computers and also drives an ice cream truck. He's never had a girlfriend, lives with his doting, alcoholic mother and, she has more than few screws loose herself.

Hartsfield, still roaming free becomes brazen and begins corresponding with the now retired detective from the case, Bill Hodges. He sends Hodges a letter and continues to taunt him back into action in a game of cat and mouse.

There were several things I liked about this SK novel -- no real horror or gore, a great hook at the beginning to keep you reading/listening, and the fact that we are told who the "Mercedes" driver was early on. I loved how disturbed and creepy King made Brady and his mother feel and there was a good amount of tension at times as well. King also did a decent job fleshing out the ancillary characters --including the "Mercedes" owner. I wasn't thrilled with the very brief romantic relationship written into the story. It seemed kind of unnecessary to me.

Overall, I'd say this story did live up to the hype that was created. The audio version, read by Will Patton, was very well done.  Readers who enjoy a good cat and mouse story should try Mr. Mercedes -- the first of a trilogy.