Every Tuesday I host First Chapter First Paragraph Tuesday Intros, where I share the first paragraph or (a few) of a book I am reading or thinking about reading soon. 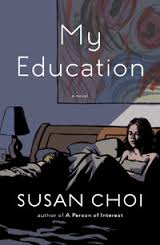 "Since arriving the previous week I'd kept hearing about a notorious person, and now as I entered the packed lecture hall my gaze caught on a highly conspicuous man.  That's him I declared inwardly, which of course was absurd.  It was a vast university, of thousands of souls.  There was no reason these two kinds of prominence --scandalous noteworthiness, and exceptional, even sinister, attractiveness--must belong to the same human being.  Yet they had.  The man was Nicholas Brodeur, though I knew it for sure only later."
~~~~~~~~~~~~~~~~~~~~~~~~~~~~~


What do you think?

Feel free to join in and post the Intro from one of your reads by linking below.