The Virtues of Oxygen; Susan Schoenberger 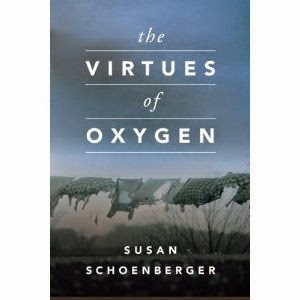 The Virtues of Oxygen is a book that I was initially drawn to because of the title and, I  also because I don’t think I’ve ever read a story about someone who had contracted polio as a child.  In this story Vivian Markham, now 63, contracted polio when she was just 6 years old. As a result she has spent nearly her entire life living in a iron lung so that she could simply breathe.  His older sister Darlene, age 10, also had polio but died  while still young.


Having lived on a farm when the Vivian was young, the parents provided the constant care required, but as they got older they moved from the farm town to a small town, where the church and residents rallied their support providing companionship and care.  One of the women who helps Vivian is Holly, a young woman who hasn’t had an easy life either.  She recently lost her husband, has two sons, and her mother has now suffered a stroke and needs constant care.  Holly’s job as a newspaper editor for the small town paper doesn’t cover her expenses and the excessive medical bills she has been left with. She is trying her best to make ends meet. My heart went out to Holly and her struggles. Holly’s is a story that will resonate with readers whose lives were turned upside down by job loss, loss of a spouse or home foreclosure.


Vivian, on the other hand, was a very strong character who lived life to the fullest despite her disability. Great with investments, computers, and business savvy in general, she was a woman who maintained friendships despite her situation.  I was inspired by the way Vivian had made the most of her life. Her story and how the community rallied to help seemed very realistic of small town life. I especially liked learning of Vivian’s early years when she was stricken with polio. She’s a woman to be admired.


The Virtues of Oxygen is a story of friendship, it’s never overly sad or sappy and the author does a great job of portraying the economic struggles of a town and its people. If you’re looking for something a bit different, this one is based on a true story, try The Virtues of Oxygen.

⅘ stars
(review copy)
Posted by (Diane) Bibliophile By the Sea at 6:30 AM