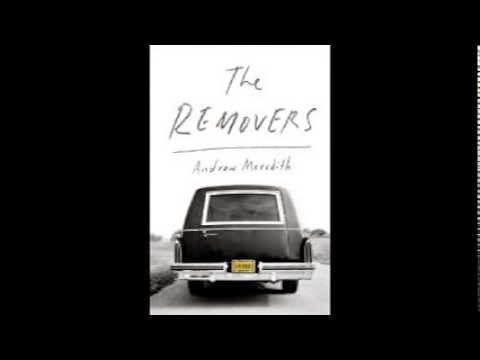 The Removers is somewhat of an unusual memoir.  In part a coming of age story, but also a story about making peace with ones past. For those author peace is found by working with the dead and their surviving family members.

Andrew Meredith was just 14-years old when he learned that his family was in trouble. His father, a professor at LaSalle University in Philadelphia was fired from his job for sexual harassment, although Andrew and his sister only learned the reason some time later. Andrew's parents stayed together for 11 years for financial reasons, despite a tension filled atmosphere, separate sleeping quarters and virtually no communication between his parents unless absolutely necessary.

Meanwhile, Andrew struggles finding his place and himself as a teen into adulthood. His relationships suffer and has low self esteem and poor body image, he claimed that by age 22 he had handled more dead women than living........
"a teenage Jerry Mathers, somehow gangly and pudgy at the same time, like a skeleton smuggling a kielbasa under his sweater."
As part of his father's termination, Andrew and his sister would be able to attend LaSalle free, and although Andrew goes to LaSalle, he flunks out after a year and a half. Out of school, out of money,  and wasting his hours drinking too much and not doing much else, he take a job with his father as a "remover" --  picking up dead bodies from hospitals and private residences and delivering them to the funeral homes. They were paid $35 each for a removal.
Between Andrews reflections on his dysfunctional home life -- how his father made his previously cheerful mother emotionally vacant over the 11 years they remained together. He shares various experiences from his calls as a "remover". Some of the "remover" stories are gross, some touching, and others quite funny. He even picks up the body of a woman he recognized as his grade school librarian, a 500 lb woman that took (5) removers to transport her body. He tries a stint living in CA working in a ritzy Beverly Hills hotel, but returns home to Philadelphia.  He later takes on work at a crematorium as well.

This story was an eye-opener for me in many respects when it comes to the whole process of cremation. Honestly, the stories he shared about those experiences were more troubling for me than the ones about just removing the bodies of the dead.  I was happy that Andrew eventually got his act together and found peace. He manages to return to school and get even a graduate degree. It's with maturity and spending more time with his father, that after hating his father for 8 years, he soon comes to terms with what has happened and realizes that while his father may not have been perfect, he always was deeply concerned about children and never stopped loving them.
Having found comfort in working with the dead, he was able to see how much that he was comforting the living survivors as well, once he owned his own funeral services business. There was an end quote that I thought were very good I thought I'd share.....

"The one thing I learned in my late approach to growing up is the peace in realizing there is nothing special in the traumas that form us.  Some children have parents die, some see siblings die, some commit murder, some see their parents split This is to say nothing of what war does.  We cherish the particulars of our past,  these events that cause our pain, but the liberation comes when we start to  how every living person has gone through something that has changed him or her, and that becoming an adult is based on a response.  If there were ever a measure to be put on the value of life, that's what it would weigh: response.  How one responds to trouble. How quickly. With how much goodness. How much strength."
Readers who enjoy memoirs --- especially one that is certainly not a run-of-the-mill story, might enjoy The Removers, a book I was happy that I tried.