To Rise Again at a Decent Hour; Joshua Ferris 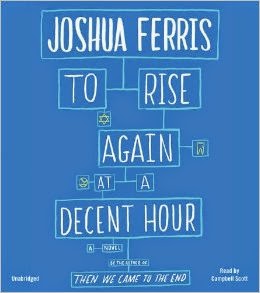 To Rise Again at a Decent Hour; Joshua Ferris
Little Brown and Company - 2014

To Rise Again at a Decent Hour, by Joshua Ferris is entertaining read, with a quirky protagonist that will make you laugh or at least have you scratching your head and asking yourself what planet does this guy come from?

Paul O’Rourke is our lonely and messed up protagonist. He’s a guy who has felt like an orphan ever since his father who suffered from manic depression took his own life when Paul was still a child. Although Paul’s a successful Park Avenue dentist now, with a five-chair practice that is opened until 10 pm some nights, and master of his craft in providing pain free services, his personal life is a mess. He’s not a great friend, and he prefers to add to his misery by watching the Boston Red Sox self destruct in solitude.  He has lots of opinions of his beloved baseball team and and their arch rivals as well.  He knows how to screw up a romantic relationship by diving in hard and fast, stalking women and by obsessing about pleasing the parents instead of focusing on building a relationship with the person he is dating.

He  smokes too much and is a pseudo atheist who seems to be obsessed with other religions at the same time. One day technology turns on Paul when someone creates a website pretending to be Paul O’Rourke DDS, then tweets begin and even a Facebook account surfaces. Who is behind this and why are they targeting Paul?  A group referred to as Ulms with a belief system is based on a “doubting God”. The group instead of targeting Paul, when all is said and done, may be the key to the sense of community Paul had been longing for all along.
This was an incredibly difficult book to review, I liked the writing, and enjoyed many of the quotes. At times I felt sorry for Paul, who creates much of his own misery, other times I was laughing about the absurdity of what I was reading. Like Paul,as a conflicted Red Sox fan (especially this year) I found his musings and even obsession with the team and players a delight. However, once the Ulms surfaced, the story seemed too weird and I lost interest. Overall, this was an okay read for me. I think readers who enjoy satires might enjoy this one a bit more than me.
3.5/5 stars
(eGalley and audio)

Quotes to help you understand our protagonist--

Posted by (Diane) Bibliophile By the Sea at 6:30 AM