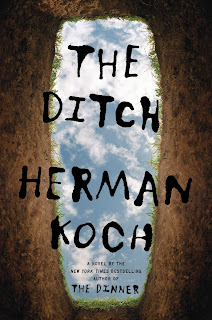 I really enjoyed the darker nature of the last (3) books by Herman Koch: The Dinner, Summer House with Swimming Pool and Dear Mr. M, so I couldn't wait to try this new novel.  Unfortunately, it was a bit of a slog for me.

Robert Walter is the 60 year old mayor of Amsterdam. Married to Sylvia, the couple has one daughter, Diana.  The story begins with a party on New Years where Robert notices his wife smiling and laughing with an alderman.  He notices him whisper something in her ear and from that point on he is convinced the two are having an affair.

The more he he obsesses about it, the more jealous he becomes and his anxiety and paranoia intensifies.  Even a vacation to Paris with his wife doesn't convince him that he's imagining the whole affair.  He decides to spend more time at home observing his wife and daughter and listening for clues. Robert is very secretive when it comes to specifics about Sylvia and Diana. Along with the whole affair suspicions, there's a minor story but a serious subject with the mayor's parents contemplating suicide. In addition, there is talk about Dutch politics and the environment including minute details about their recycling program.

I really wanted to like this novel. There is a good amount of subtle humor which I enjoyed and, it has an ending I wasn't anticipating as well but, overall the story just failed to engage me.
Posted by (Diane) Bibliophile By the Sea at 4:08 PM