Book Review - The Answer Is...Reflections on My Life; Alex Trebek 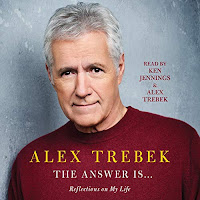 I listened to this audio (4.5 hours) twice, alone and then on a road trip with the hub. We both enjoyed it as we are long time Jeopardy fans who were saddened to learn in March of 2019 that Alex Trebek had been diagnosed with Stage 4 pancreatic cancer.

The memoir is read mostly by Ken Jennings, an all-time champ (winning 2 million plus) from the show. He is now close friend of Trebek.  Alex does read the intro and wrap up as well as a few smaller parts in between.  All of the chapters about his life start out in the form of a question, much like the game show.

Trebek was raised along with his younger sister in a working class Canadian household. He's a Mr. Fix-it type who always liked to putter around the house and admits that he has a 3-car garage full of tools and gadgets, some he was never quite sure how to use.  He's also a charitable man, a real humanitarian who believes deeply in helping the less fortunate, humans and animals alike. He doesn't feel that wealthy people, including himself, need a tax break and that they should pay their fair share so that more of less fortunate can be helped.  Married to his second wife, Jeanie, for 30 years, (she is 24 years younger) the couple has 2 adult children together. Although they've traveled quite a bit, Alex also admits to enjoying a simple life: home, family and relaxing outdoors.

Trebek admits that he never wanted to write a memoir and had been approached many times earlier. However, after his cancer diagnosis, he agreed as he didn't want an unauthorized bio written after he passes away.  100% of the proceeds of this book will be donated to a variety of organizations important to Trebek.

Although we enjoyed listening to this memoir, at times it didn't feel like a lot of thought was put into it. Perhaps the book was a bit rushed because of the seriousness of his illness.

Posted by (Diane) Bibliophile By the Sea at 3:51 PM