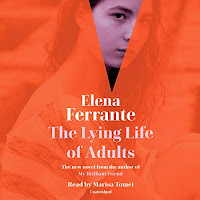 It's the 1990s when 12 year old  Giovanna, an only child,  overhears her father tell her mother, that she is getting the ugly face of his sister Vittoria. The comment shocks her and is more than she can bear,  Who is this Aunt Vittoria and why have they never even met? Why doesn't her father speak to his own sister?  Giovanna becomes obsessed with finding out more about her ugly aunt. When her parents see that she has found the aunt's number in an old address book, they encourage her to look her up.

Giovanna and her well-educated professor parents live in a more affluent area of Naples. Vittoria lives in a lower class, industrial area. Her apartment is filthy, she's rough around the edges yet she is very welcoming and even insists on squeezing fresh oranges for juice for her niece.  Over a period of time Giovanna learns much about her aunt, even about her dead former lover, Enzo. She even gets to know Enzo's adult children in the process. Vittoria pulls no punches, not only does she teach Giovanna about the importance of loving her body and the powers it possesses, she also tells her a few things about her father and instructs her to watch, rather spy on, her own parents as well.  She learns a few disturbing things in the process including the fact that their marriage is on shaky grounds.

With familiar themes, as in earlier Ferrante novels like, social class, relationships, self-doubt, womanhood and sexual awakening, I was disappointed that this story lacked a real plot line.  I also did not care for how abusive some of the male characters had been crafted. There were some blunt sex scenes inserted as well which seemed unnecessary.   I do expected that Giovanna will reappear in another novel in the future.

The audio book was read by Marisa Tomei and even though she did a terrific job, overall, I didn't really care for this one.