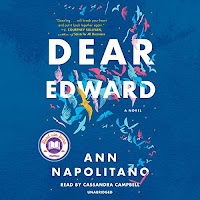 Twelve year old Edward Adler is the sole survivor of a flight from NY to Los Angeles, CA. 183 passengers and a crew of 8 perished along with Edward's parents and his older brother.  Hospitalized and eventually recovering from his injuries, the next part, the emotional healing, is sure to be the hardest. How does a young boy like Edward deal with such horrific loss as well as the difficulties of adolescence and still find their place in the world?

Edward is taken in by Edward's mother's sister, Lacey, who is also grieving, dealing with the loss of her sister. Neither she nor her husband John are comfortable talking about their losses. Then there is Edward's therapist, Mike, and his beautiful yet quirky next door neighbor, Shay, who is always there for him when ever he needs a friend to talk to.

The back story alternates between some of the passengers that were on board who came from all walks of life. Edward's story left a lump in my throat at times, I found myself really taken by his story as well as one of the other passenger's story as well - a few others were less interesting to me. Overall, I was happy I tried this one, the writing is excellent and it was expertly narrated by Cassandra Campbell. If you are in the mood for a well written story about trauma, grief, survival, loss and healing, be sure to add this one to your list. Deeply moving.