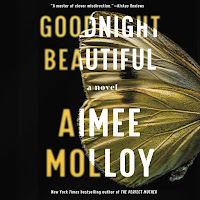 Sam Statler and Annie Potter are newly married and leave New York City for a great opportunity to live a quieter life in a large Victorian home in upstate New York. Sam's mother has dementia, she's living in a retirement home nearby. Even better, Sam, a psychologist can set up his therapist practice in their home. Annie is a Woman's Studies professor at a local college. The couple, who married rather quickly, haven't shared everything about themselves to their partners. As we read, we see these secrets closing in.  One day as Sam's patients appear for their therapy sessions, Annie realizes that she can hear the conversations through the vents; it's hard to resist not listening in.  Then one day Sam disappears during a snowstorm. Annie is frantic, calling police and hospitals to see whether there has been an accident. Or, could Sam, have left his new wife for one of the attractive women who have confided in him their most intimate thoughts during their therapy sessions?

I love psychological fiction but, perhaps I'm on overload. This book started out interesting enough, it has the trademark unreliable narrators, family secrets and some unexpected twists. I liked Annie's wry sense of humor. The narration is both first and third person and the audio is narrated by four different individuals. While I thought this would work well,  I sometimes found myself questioning who the narrator was, which proved a bit confusing.  In this psych thriller, I quickly learned that nothing is as it appears. There was also a famous scenario from a Stephen King book used to have this story play out, to me that just felt wrong.

Posted by (Diane) Bibliophile By the Sea at 6:20 PM