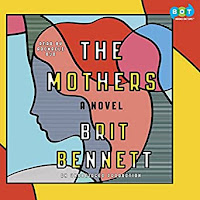 When The Mothers was first released in 2016, I didn't feel compelled to rush right out and read it but, that changed after recently reading and loving the author's second book, The Vanishing Half.

Set in Southern California, Nadia Turner is a 16 year old black girl with a promising future in store, a scholarship to the University of Michigan. She's a bit rebellious yet she's thrived living with her father, despite the fact that her mother committed suicide when she was only 10 years old.

The story begins with a 16 year old Nadia finding herself pregnant by the pastor's 21 year old son Luke Sheppard. Luke was once a football star, now a young man with shattered dreams as a result of an injury, he waits tables at the local diner. Too young for parenthood, Luke drops off Nadia at a clinic and pays for an abortion; he then disappears from her life but, they will meet again. What are the life long consequences of a secret of this magnitude that both have kept? It's something she hadn't even shared with her best friend Aubrey.

There's a lot to think about in this novel. There are themes such as: love, loss, family and friendship and of course, "Mothers" and motherhood: the loss of a mother, a church group known as "the mothers", older women who curtailed church/community gossip and give superficial, often unsolicited, advice.  I think the author made it easy to understand how painful and long lasting the effects of losing a mother or having an uncaring mother, in the case of Aubrey really is.  I did think the characters could have been explored in more depth, especially since we follow them from the ages of 16 to their mid 20s. I also felt the overall flow felt uneven at times. I'm not sorry I read this novel, but I am thrilled that I read, The Vanishing Half first - that one was perfect for me.

The audio version was read by Adenrele Ojo who did a great job.

Posted by (Diane) Bibliophile By the Sea at 5:09 PM