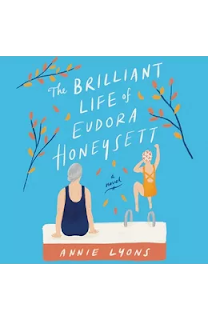 ONE SENTENCE SUMMARY:  A sweet story about an elderly woman who feels her life is over and, a few caring individuals who show her maybe it's not.

BRIEF REVIEW:  Eudora (Dora) Honeysett is an 85 year old single woman with no friends or family.  Her entire life she has sacrificed her own happiness by putting the needs of others first.  The oldest child, she was only around 10 when her father went off to fight in WWII, never to return.  Her younger sister Stella was born shortly after and mother Beatrice was never able to cope with raising another child.  Eudora, still a child herself,  stepped in to be her sister's protector from their mother's anger.  More sacrifices and disappointments soon followed for Dora whenever it seemed there was a slight glimmer of happiness for her as an adult.
Now an old woman Eudora decides she wants to end her life on her terms before she is unable to care for herself. She contacts a clinic in Switzerland to make arrangements. It is around the same time that Rose and her family move in next door. Rose is a sweet, smart 10 year old who realizes that she enjoys spending her free time with Rose instead of children her age.  She is quick to teach Eudora what living is all about. Then there is another neighbor Stanley, a recent widower who is lonely as well who enters the picture.
Even though it was easy to see where this story was headed, I really enjoyed the ride.  The characters in this story are memorable - Eudora, grouchy, set in her ways and strong willed.  I found her life story sad at times and felt badly that she gave up her earlier chances for happiness for others. Rose is insightful and wise beyond her years and brought so much life, fun and humor to the story, as did  Stanley, a lonely man who needed a friend.  The story in many ways reminded me of A Man Called Ove but, most of all it acted as a reminder to readers that showing a little attention and concern to a lonely person can make all the difference in the world.  I think this would make a good book club choice as well.
RATING: 4/5 stars
MEMORABLE QUOTES:    “Life is precious and as long as we have a reason to continue, we should follow that path.”
Posted by (Diane) Bibliophile By the Sea at 10:48 AM