Book Review - The Murder at the Vicarage; Agatha Christie 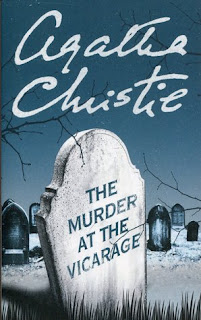 TITLE/AUTHOR:   The Murder at the Vicarage; Agatha Christie

ONE SENTENCE SUMMARY:  This was the first book in the Miss Marple mystery series, just who killed Colonel Protheroe?

BRIEF REVIEW: When I first read the intro paragraph to this book sometime back, I figured I'd be in for a fun ride, I liked the humor here:

"It is difficult to know quite where to begin this story, but I have fixed my choice on a certain Wednesday at luncheon at the Vicarage.  The conversation, though in the main irrelevant to the matter in hand, yet contained one or two suggestive incidents which influenced later developments.
I had just finished carving some boiled beef (remarkably tough by the way) and on resuming my seat I remarked, in a spirit most unbecoming to my cloth, that anyone who murdered Colonel Protheroe would be doing the world at large  a service."
Locals are shocked by the murder of Colonel Protheroe, a local magistrate whose body is found is the study of the Vicar.  The Colonel had many enemies and, he had a pretty, younger, second wife as well.
The Vicar, Rev. Len Clement, narrates the story.  He is a fun, observant and a gentle soul and smart too (well maybe, he did marry wife Griselda after just knowing her for 24 hours.)  She's not the type of woman you would expect to be a vicar's wife.  When Miss Marple does eventually enter the picture,  she's not what I expected: she a nosy, next door neighbor of the vicarage, a spinster with binoculars in tow, she's quite clever in her process.  While I did like the humor in this mystery, I wished I liked it more .  There were at least seven potential suspects and the story seemed like an unlikely mess.  It got somewhat confusing as well with all the characters and everyone telling half-truths.
Unfortunately, bottom line, I think I'm just not an Agatha Christie fan. I've tried a few of her books over the years and they just don't seem to work well for me. While I liked the narrator, I just struggled with this one and set it aside several times to pick up other books.
Are you an Agatha Christie fan?
RATING: 3/5 stars
Posted by (Diane) Bibliophile By the Sea at 10:25 AM