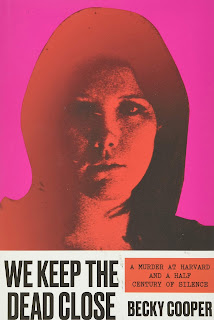 TITLE/AUTHOR:  We Keep the Dead Close: A Murder at Harvard and a Half Century of Silence; Becky Cooper
PUBLISHER:  Grand Central Publishing

ONE SENTENCE SUMMARY:  A true crime memoir about a 1969 murder that rocked Harvard and, a case that remained unsolved for half a century.

BRIEF REVIEW:  Jane Britton was a grad student preparing for her doctorate in Anthropology at Harvard in 1969 when she was found brutally beaten and raped in her Cambridge, MA apartment.  Her murder was unsolved for 50 years although there were several suspects which included faculty.
The author Becky Cooper, became interested in Jane's unsolved case in 2009 when she was an undergrad at Harvard herself. She soon began to immerse herself in the details of Jane's life on campus as well as many of the rumors and speculation about her life leading up to her murder. Included in this was Jane's relationship with a married, tenured, faculty member, a few boyfriends and conversations with former classmates and friends. With each new interview the story grew more complex. Not only was this a story about Jane Britton, it was a story about a prestigious institution and the university's desire to make the speculation and investigations disappear in an effort to protect the school's reputation and that of its faculty members.
The story jumped back and forth in time from the late 1960s to the author's time on campus followed by nearly a decade of research and interviews.  I thought the author did a great job acclimating the reader to Harvard /Radcliffe culture and the way faculty were revered and coverups, at times,  seemed almost commonplace.   This book, 500 pages with sources and photographs, was very good but, I did think it could have been shortened. I didn't think that the author needed to insert so much of her personal story into this effort.  The Jane Britton murder was eventually solved a few years ago as the author was finishing this book.  (DO NOT Google this case, as I did,  if you plan to read this book -- even though I knew the outcome, I still thought the author's efforts were commendable. and I was happy I read this one.
Thanks to Grand Central Publishing for sending me a finished copy in exchange for my unbiased review.
RATING: 4/5 stars
Posted by (Diane) Bibliophile By the Sea at 11:55 AM