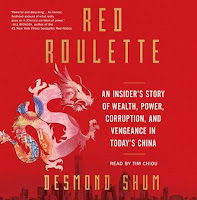 In this biography, Desmond Shum tells a couple of stories.  First there is his own story about his rise from rags to riches. He was born into a poor family in China and moved to Hong Kong when he was young, excelled in swimming and was able to attend college in the US.  Later moving back to China, he was driven to succeed in the business world even if it meant partnering with the upper echelon of China's communist party under former Premiere Wen Jiabao.  Shum then also tells of his marriage and subsequent divorce to an equally power driven woman named Whitney Duan and their struggle to finally have a child.  Finally, he tells the story of Wendy, his now ex-wife and her disappearance in Beijing, along with three of her coworkers in September of 2017.  In addition, Shum also gives us an insider's look at the couples involvement with the red aristocracy.

I had mixed feelings about this book.  I loved the story of both Desmond and Whitneys early humble beginnings and the couples entrepreneurial spirit.  I loved learning what drove each of them to become so power hungry and prove their success even if it meant taking such risks by getting so involved with the powers that be.  It was fascinating learning about the power and corruption and the dynamics between the political factions in China from a former insider. I also liked learning about the rise of the current ruler for life Xi Jinping. On the other hand, what I found annoying was the constant emphasis on possessions the author and his ex-wife acquired.  There was incessant label branding along and mentions of expensive homes, private jets, fast cars, clothing, jewelry or even wine.  At times the author came across simply as power hungry and greedy.  Overall, I was still happy I listened to this one even though I had some issues with the overall story. The audio was read by Tim Chiou who did a very good job. 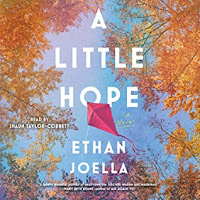 A Little Hope: Ethan Joella
Simon & Schuster Audio - November -2021
(7 hrs. 21 min. - Shaun Taylor-Corbett - narrator)
In this debut novel which takes place in the small town of Wharton, CT we meet ordinary people who are dealing with a variety of life challenges and disappointments.
The novel begins with Greg Tyler,  husband of Freddie and father of a young daughter Addie.  Greg is also a businessman and a man who is battling multiple myeloma. His diagnosis has been devastating but he isn't planning on giving up this fight of his life.
The above story moves into other interconnected stories about other townspeople who are facing or have faced other setbacks and difficulties such as loss of loved ones, betrayals, infidelities and addiction issues.  Despite the difficulties and somewhat depressing themes in these stories, we also witness some small joys and bright spots along the way. These stories remind us of the importance of having people in our lives who can make all the difference when we are faced with a crisis.
This is the type of story that could have taken place in any small town USA. It is told from a third person POV which made it a bit more difficult for me to connect with some of the characters but, I liked that when I turned the final page I was left with a somewhat hopeful feeling. The audio book was read by: Shaun Taylor-Corbett who did a very good job. Overall - an impressive debut.
Thanks go to Simon & Schuster Audio for allowing me access to these audiobooks in exchange for my unbiased reviews.
Posted by (Diane) Bibliophile By the Sea at 7:29 AM