2 books that left me a bit disappointed - The Hotel; Pamela Kelley and Still Life; Sarah Winman 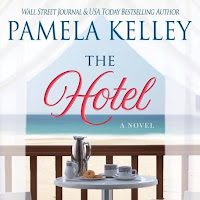 The Hotel; Pamela Kelley
Piping Plover Books - 2021
The Hotel is a novel that takes place in Nantucket, a place and setting that is hard to beat.   In this story The Whitley Hotel is the most famous and luxurious hotel on the island and, it has been in the family for years. Set on white pristine beaches, the hotel and surrounding cottages are about to undergo a management change.  Cousin Andrea is out as general manager due to her abrasive personality and granddaughter Paula who had less of a presence because of her accounting role is now moving to the general manager position. In addition, grandfather Whitley has hired David as a consultant to aid in the transition.  There is also Nick, a chef and brother to Paula as well as Bella, a Hollywood superstar who is staying at the hotel somewhat discreetly.

The chapters alternate between the characters and what started out promising and had a picture perfect setting, the one-dimensional characters and under developed yet predicable story left me disappointing.  I found lots of irritating details like what an Etsy store is and what Lyme disease unnecessary and, I wished the author devote more time in plot line and character development.  The audio book was read by Leslie Howard who did a fine job but, overall this story itself was disappointing. 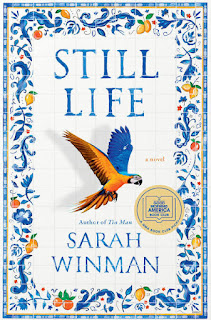 Still Life was another book that had so much promise and although many readers seemed to love it, it just was a struggle for me.

Still Life begins in Florence and spans the years 1944 - 1979.  At the heart of the story is a young British soldier and globe maker named Ulysses Temper and 64 year old Evelyn Skinner, an art teacher and historian and possible spy.  The two meet in the midst of war as Ulysses hides out in a wine cellar. He is a kind and gentle man who is easy to like and one people are quickly drawn to.  As the war ends and Ulysses returns home, we meet wife Peg, a marriage of convenience, as well as a quirky cast of characters including an Amazonian parrot name Claude who quotes Shakespeare.

I started with the audiobook which is read by the author, but, I found it very difficult given the author's heavy British accent and multiple characters (8+) to follow. I switched to the hardcover and although this was easier, the hefty novel overall still wasn't a great fit for me and I found myself skimming sections.  I felt some of the characters were very well written but, I think my biggest pet peeve was that there was quite a bit of dialogue and the author did not use quotation marks. Unfortunately, I guess I haven't had the best luck with this author as I see her novel Tin Man was not a winner for me either - review HERE.

Posted by (Diane) Bibliophile By the Sea at 1:28 PM