So this week I was looking for a couple of quick, easy reads and realized that Tom Perrotta, an author I haven't read in over (10) years, had a new book out.  I was curious who Tracy Flick was and then realized that Perrotta had first created Tracy F back in 1998 with his book called Election - which was also a movie.  Since I hadn't read Election, I grabbed a copy from the library and then immediately dove into Tracy Flick Can't Win afterwards - this time on audio. Both were fun reads and although some of the topics are more serious, the stories are written in a satirical, fun kind of way. 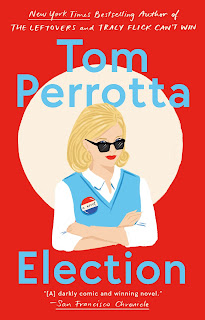 Election; Tom Perrotta
Penguin Group -1998 - library loan
(just over 200 pages)
When I sat down to begin Tracy Flick Can't Win, I realized Perrotta wrote about Tracy F some 20+ years earlier, so I immediately looked for Tracy's debut book at my local library.  I then learned that the book Election, was also a movie (1999).
So who is Tracy Flick? In 1993 she was an all around, ambitious high school girl who was determined to do it ALL  At Winwood High School in New Jersey Tracy set her sights on becoming the President.  Mr. M (McAllister), a history teacher and student government advisor holds a grudge against Tracy and convinces Paul Warren, a good looking, smart athletic type to run against Tracy.  What starts out as an exercise in educating young minds about the democratic process turns into something no one was expecting.
This was an easy book to read in one sitting if you are so inclined.  The POVs alternated between the younger students and the adults - which worked really well. Readers who enjoy satire should enjoy this story.
Rating - 3.5/5 stars 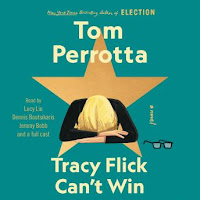 Tracy Flick Can't Win; Tom Perrotta
Simon & Schuster Audio - 2022
(6 hours 2 minutes - 6 diff narrators - very fun)
(audio download sent to me by publisher)
In book #2 Tracy Flick, now in her 40s is the Assistant Principal at a NJ high school. She has a 10 year old daughter, a boyfriend and a side business as well.  Things may be finally looking up for Tracy when the principal, Jack Weede, announces he plans to retire.  At the forefront of the school's agenda is The Green Meadow High School Hall of Fame.  Tracy and her male colleagues have differing opinions about who is best individual to be honored.  Once again, the tables seem stacked against Tracy but, is that how it will all play out?
People seem to respect Tracy but, they don't necessarily like her. She is a bit of a loner who feels like she has to do everything if it is to be done right.  Tracy is still a spunky fighter almost 30 years later and I found it hard not to root for Tracy.  The story had lots of salient topics: bullying, gun violence, adultery,  LBGTQ issues and more.  Although there isn't a lot to the overall storyline, the chapters are short, the story fun and satirical and overall, it made for quick entertaining read.  All the flashbacks to high school days and drama of days gone by made the story entertaining  What really gave this story a unique feel was the fact that the audio was narrated by (6) different voices.
Rating - 4/5 stars
Posted by (Diane) Bibliophile By the Sea at 11:19 AM