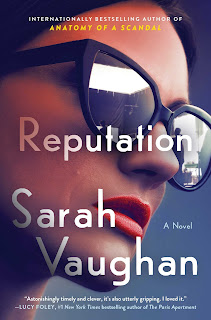 Emma Webster is a former teacher and now a British politician who has sacrificed a lot along the way.  She has worked hard to build her reputation while others have tried to destroy her.  Emma has a fourteen year old daughter named Flora who has had a tough time in school as a result of bullying and, although mother and daughter have a strained relationship at times, when another teen commits suicide after social media trolling and harassment, Emma is determined to do something about this.  She sets out to work on a new law that will hold individuals responsible for vicious online attacks and exploitation of others accountable for their actions.  When a journalist who has threatened Emma in the past is found dead in her home, things take a dramatic turn.

This was a timely thriller. Told from the POV of multiple narrators, I thought Emma and Flora were both strong characters.  There was a courtroom drama which was a bit too drawn out but, it was important to the story as well.  I loved the way the story played out very happy with the unexpected twist and the overall story line.

(NOTE: a print edition was sent to me by the publisher in exchange for my unbiased review.)