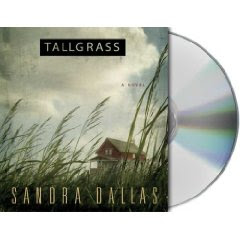 After a friend of mine raved about Tallgrass, by Sandra Dallas, I decided to try the audio version. The reader Lorelei King was terrific. I started this one about 2 weeks ago, but since I do not drive long distances too often it took me until now to finish it.


The story is narrated by a young girl named Rennie Stroud, and the story takes place in the early part of 1942, not long after the bombing of . Rennie tells the story what happened the summer she turned thirteen when the Japanese came to to live in an internment camp known as Tallgrass. Tallgrass is less than one mile from Rennie's home and the family farm.


I loved Rennie. She is a bright and intuitive young girl who spends her days observing the actions of the people around her. Rennie’s father is much more tolerant of the Japanese people at the camps than most of their neighbors. He feels that these people have been stripped of their rights. The neighbors, on the other hand, believe it is wrong that their own sons are off to war while some Japanese roam free. When a young handicapped girl in town is murdered, the neighbors become suspicious of the Japanese camp residents. Rennie's keen eye during the investigation of the murder of the young girl to helps aid those investigating the crime.
There are several themes which evolve in this story: family bonds, friendship, loyalty and injustice. Towards the end of the story the mystery of the young girl’s death is uncovered, for a satisfying ending. This is a heart warming coming of age story. I am looking forward to the author’s next novel Prayers for which will soon be released.
RATING - 4.5/5 - COMPLETED - 3/11/09
WHERE FROM: Library

Posted by (Diane) Bibliophile By the Sea at 7:17 PM