52 - The Boy in the Striped Pajamas; John Boyne 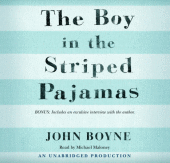 The Boy in the Striped Pyjamas Reader

, by John Boyne was an amazing audio book. Here is what the back of the audio book says about the story:

.....Audio book description "The story of The Boy in the Striped Pajamas is very difficult to describe. Usually we give some information about the audio book, but in this case we think that would spoil the listening. We think it's important that you start to listen without knowing what it is about. If you do start to listen, you will go on a journey with a nine-year-old boy named Bruno. (Though this isn't a story for nine-year-olds.) And sooner or later, you will arrive with Bruno at the fence. Fences like this exist all over the world. We hope that you never have to encounter such a fence."

Classified as a book for Young Adults, the story is told through the eyes of 9-year old, Bruno who returns home from school one day, and is told that his whole family (mother, father, sister) are moving far away because of his father's job promotion. He must leave his huge house in the heart of , and move to a place called "Out With" (), a place in . Bruno is a lonely, and a pretty naive young boy. He is very unhappy in "Out With" as he must leave all his old friends behind. One day from his window, Bruno notices a tall fence running farther than his eyes can see. There seem to be lots of people gathered beyond the fence, and Bruno is curious about what he sees in the distance.

Since Bruno has always wanted to be an explorer, he wants to learn more about the area around him, and hopes to meet some friends as well. One day he meets a boy the same age as himself, who even has the same birth date as Bruno. The boy is named Schmuel, and he is very thin, his skin is gray in color and his eyes are set deeply. He realizes that the boy is hungry too. The two boys meet for one year along the fence to talk; Bruno even brings the boy food from time to time. He asks why the boy gets to wear his "striped pajamas every day"? The boy tells him that everyone dresses the same. Each day, the two children meet and talk, and each day Bruno learns a little more about his new friend and the people he lives with.

Bruno's innocence about what is going on around him seems very unbelievable, but what this innocence does is make the conclusion of this book all the more shocking. This is one story I will never forget. I look forward to seeing the movie based on this book as well, even though the topic: Nazi Germany and the Holocaust is a tough topic to read about or view.
The Boy in the Striped Pyjamas Reader