Coming Soon To a Book Store Near You - Isabelle Day Refuses to Die of a Broken Heart; Jane St. Anthony

I just read about this "coming soon" book and thought it sounded great. It's less than 200 pages as well. Sound like one you would consider reading? 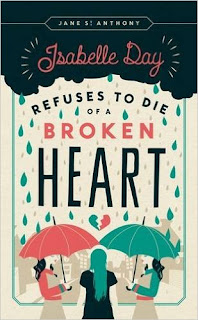 n Milwaukee, Isabelle Day had a house. And she had a father. This year, on Halloween, she has half of a house in Minneapolis, a mother at least as sad as she is, and a loss that’s too hard to think—let alone talk—about. It’s the Midwest in the early 1960s, and dads just don’t die . . . like that.
Hovering over Isabelle’s new world are the duplex’s too-attentive landladies, Miss Flora (“a lovely dried flower”) and her sister Miss Dora (“grim as roadkill”), who dwell in a sea of memories and doilies; the gleefully demonic Sister Mary Mercy, who rules a school awash in cigarette smoke; and classmates steady Margaret and edgy Grace, who hold out some hope of friendship. As Isabelle’s first tentative steps carry her through unfamiliar territory—classroom debacles and misadventures at home and beyond, time trapped in a storm-tossed cemetery and investigating an inhospitable hospital—she begins to discover that, when it comes to pain and loss, she might actually be in good company.
In light of the elderly sisters’ lives, Grace and Margaret’s friendship, and her father’s memory, she just might find the heart and humor to save herself. With characteristic sensitivity and wit, Jane St. Anthony reveals how a girl’s life clouded with grief can also hold a world of promise.

Email ThisBlogThis!Share to TwitterShare to FacebookShare to Pinterest
Labels: Coming Soon to a Book Store Near You, University of MN Press