Coming Soon to a Bookstore Near You ~ The Mistake I Made; Paula Daly

Here's a new one releasing soon that I think sounds pretty good. Would you read it? 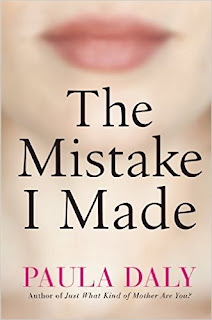 The Mistake I Made; Paula Daly
Grove Press - September - 2015

he Mistake I Made is the latest page-turner from one of the England’s most captivating new thriller writers. In her provocative and riveting third novel, Paula Daly focuses her masterful eye for psychological suspense and family drama on an indecent proposal that has fatal repercussions.Single mother Roz has reached breaking-point. After the dissolution of her marriage, Roz’s business has gone under, debts are racking up, the rent is late (again), and she's struggling to provide for her nine-year-old son, who is starting to misbehave in school. Roz is in trouble. Real trouble.When Roz returns home from work one day and finds an eviction notice, she knows that it’s time for action—she has two weeks to find a solution otherwise they will be kicked out of their home. Increasingly desperate, Roz doesn’t know where to turn. Then the perfect opportunity presents itself. At her sister’s fortieth birthday party, Roz meets Scott Elias—wealthy, powerful, and very married. But the impression Roz leaves on him is indelible. He tracks her down and makes Roz an offer to spend the night with him—for money. He wants no-strings-attached intimacy and can guarantee total discretion. Could it be as simple as it sounds? With that kind of cash, Roz could clear her debts and get her life back on track. But as the situation spirals out of her control, Roz is forced to do things she never thought herself capable of. Can she ever set things right again?
Posted by (Diane) Bibliophile By the Sea at 12:00 AM

Email ThisBlogThis!Share to TwitterShare to FacebookShare to Pinterest
Labels: Coming Soon to a Book Store Near You, Grove Press