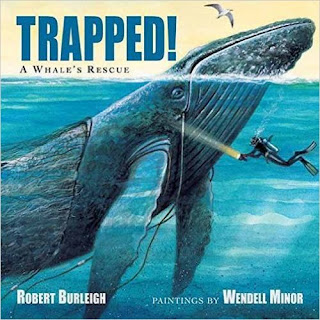 Trapped: A Whale's Rescue, is based on a true event which occurred in the icy waters near San Francisco on December 11, 2005.

After a crabber's fishing net was left in the waters of the Pacific ocean, a humpback whale, swimming and feeding on krill became wrapped in the large nets. The ropes were cutting into her mouth and wrapped around her fins making it impossible for her to swim free and breathe normally.

Despite the fact that mammals such as these can be unpredictable when they feel threatened or frightened, a team of rescuers and divers worked tirelessly to free the frightened whale.  More than 20 ropes were wrapped around the frightened whale.  When all was said and done, no divers were injured and before the freed whale swam off, she circled the divers and gently nudged each one as if to show her appreciation.

I really enjoyed this story and felt it would make a great addition to school and public library collections. The painting-like illustrations seem to come alive on each page so that you can almost feel the leathery skin of the whale. The illustrations help to show just how scared the whale must have been when the nets restricted her ability to swim and even breathe.

In the back of the book there is lots of interesting information on the humpback whale --for example, the humpback has lungs the size of a small car; females weigh around 50 tons; life span 40-50 years and the heart weighs 400+pounds. 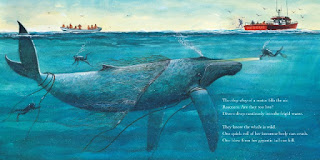