Smoke Gets in Your Eyes and Other Lessons From the Crematory; Caitlin Doughty 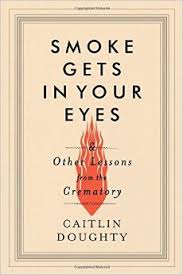 
While many people choose not to think about death and dying, 20-something author Caitlin Doughty was obsessed by it at an early age.  At the age of eight she performed a ritual the she believed would help keep death at bay. After growing up in Hawaii and a college degree in medieval history, she briefly considered a career in academia, but quickly decided it just wasn't for her.  Instead she took a job as a crematory operator at Westward Cremation & Burial in California and later went to mortuary school.


Her story is an eye-opener and certain words will stick in my mind forever when I think about a body being prepared for viewing --- eye-caps, mouth-closing gun, super glue and even sometimes saran wrapped arms when clothing on the deceased is a bit too tight.

She even talks about what is required when embalming a body that has been autopsied, and describes what human decomposition smells like ---ugh --ugh (I'd quote it, but you really need to read it for yourself if your curious).

Fortunately, given some of the details that she shares, much tactful humor is infused throughout.  It was interesting to learn about death practices and customs in this country and other cultures as well (where death is less feared because of customs and attitudes). Here in the US we tend to avoid talking about death and even spending time with the dying, We also tend to have this fear or aging gracefully and accepting that death is one thing no of us can avoid.  I felt like I learned a lot as I read. The biggest message that came across overall is that once we understand more about death and become more accepting of the end of life process, the fear some individuals experience when they think about death won't seem as frightening.

I'm happy I gave this memoir a try and, in many ways it reminded me of another memoir I read and enjoyed in the past year on the same subject more or less -- The Removers, by Andrew Meredith.  I would recommend both of these books to readers who are curious about the funeral business, what happens to the body after we die, as well as various methods and processes used for the preparation and the disposition of the body.  Overall, Smoke Gets in Your Eyes, is told in a candid manner that makes the subject of death anything but dry or matter-of-fact. It's honest, at times gritty, but very very good.

Posted by (Diane) Bibliophile By the Sea at 9:09 PM