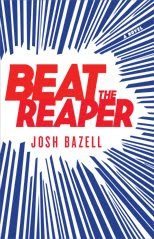 I have to admit, Beat the Reaper: A Novel

, is not the type of book I would typically choose. I was, however, curious about this recent release as I heard that Leonardo DiCaprio is hoping to star in a movie based on Bazell's debut book.
The author, Josh Bazell has a BA in English literature and writing from and an MD from . Currently a resident at the of , , he wrote Beat the Reaper: A Novel

while completing his internship at a hospital not at all like the one described in this book.

Pietro Brwna, abandoned by his parents when he was young was raised by his grandparents. One day he discovers his grandparents murdered, and himself alone. Pietro (later known as Peter Brown) becomes friends with the son of a MOB Lawyer, and the family takes him in. Peter is bent on revenge against the people who murdered his grandparents, and he soon starts working for the MOB as a hit man.

Later, after making a break from his past and entering the Federal Protection Witness Program, he becomes a doctor at one of the worst hospitals in . While making rounds one day, Peter notices a familiar face from his hit man days. The patient is Nicholas LoBrutto, AKA... Eddy Squillante. Nicolas / Squillante has stomach cancer and does not have long to live He is threatening to blow Peter´s cover if Peter does not save his life. Will Peter be able to "Beat the Reaper"?
This book is an extremely fast paced thriller. The book has several quirky characters which were really well developed. Another thing I loved about this book, was that there were footnotes peppered throughout the book which added lots of humor.
for example on page 165 ..."I use a random patient ID number to open up a fluids cabinet and take out a bottle of water with 5 percent dextrose." *

(footnote) * Most bottled water in hospitals has 5 percent dextrose. This is to prevent the phrase "Liter of plain
F_ _ _ ING water: $35 " from appearing on your bill.
This book is darkly comical and pretty wacky to say the least, but strangely, I was not able to put the book down. There is an awful lot of profanity in the book, so if that bothers you, you might want to pass on this book, otherwise, Beat the Reaper: A Novel

is recommended if you are interested in a walk on the wild side.
Posted by (Diane) Bibliophile By the Sea at 4:04 PM