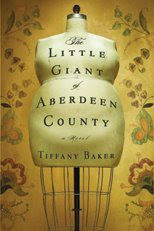 I absolutely loved The Little Giant of Aberdeen County

. An amazing debut for Tiffany Baker.


The story begins when Lily Plaice was pregnant with her second child in 1953 , and covers the span of about 40 years. Everyone in her small town in Aberdeen County, New York, suspected that Lily was going to deliver a huge baby, but when delivery day arrived, no one was prepared for exactly how huge the baby girl that they named Truly would be. The baby was so big, that Lily died giving birth to her.

The father, a barber who drank beer for breakfast, was not prepared to take care of Truly and her older sister Serena. There were no birthday parties, no Christmas tree, and only hand me down clothes. He blamed Truly for his troubles and for the death of his wife.

Little Truly continues to grow huge because of a pituitary gland deformity, and she becomes the subject of constant laughter and abuse because of her size. She must wear men's shirts as nothing fits her. Her father even tells little Truly "no wonder Lily died pushing you out. Hell, you'd block a barn door". Her teacher on her first day of school, tells five-year-old Truly "You're a Little Giant". Truly describes the differences between her appearance and her sister's appearance by saying: "The two of us were as opposite as sewage and spring water".
Truly is resilient, making the best of a bad situations, and she often finds comfort at her mother's grave. When the girl's father dies unexpectedly, the girls are separated. Pretty Serena Jane is sent to be raised by a wealthy family, and Truly goes to live on a farm with a poor family.

Serena is popular, and has a lot going for her. She eventually marries Bob Bob Morgan a doctor who came from a family of doctors. It is actually believed that during the Civil War, the first Robert Morgan married the town witch, who healed the sick, and was said to have hid her spell book before she died, but no one had been able to find it. Serena gives birth to a son Bobbie. Unhappy in her loveless marriage she disappears, and Truly is told that she her sister has died.
Doctor Bob Bob gets Truly to move in with him to cook and clean for him and her eight-year-old nephew Bobbie. Bob Bob is cruel and always taunting her about her size. However when Truly begins to play with various herbs and finds she has the ability to heal illness with herbs and other secrets hidden within the folds of the Morgan family magical quilt. She eventually unearths old secrets, and is determined to seek revenge on Bob Bob who tormented her.

Truly, the narrator of this story is one tough cookie. She makes a wonderful narrator who just seems to take what bad breaks life throws at her, and she finds happiness and love in unexpected places. The writing style of this book was magical, and the contrasting themes worked so well in this story for me. There were several twists in this story as well. The Little Giant of Aberdeen County

was totally enjoyable and is highly recommended. I will be watching for more books by this author.

Posted by (Diane) Bibliophile By the Sea at 9:55 AM